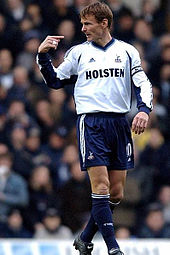 Edward Paul "Teddy" Sheringham MBE (born 2 April 1966) is a retired English footballer, and the father of footballer Charlie Sheringham. Sheringham played as a striker, and had a successful career at the club level, winning almost every domestic honour available with his clubs, most notably the Treble with Manchester United in the 1998–99 season. The pinnacle of his career came when he scored the equaliser and provided the assist for Manchester United's winning goal in the 1999 UEFA Champions League Final against Bayern Munich. Sheringham also represented England at international level. He was given an MBE in June 2007.[1] He retired from competitive football at the end of the 2007–08 season with Colchester United, at the age of 42, after a career lasting 25 years.