It is our sad duty to announce that Doug Insole passed away on 5th August 2017 at the age of 91. The funeral was attended by close friends, family and invited guests. A Memorial Service will be held later this year, details of which will be released in due course.

The Old Monovians Association was represented at the funeral

Doug Insole was one of our most well known Old Monovians and I was privileged to attend his funeral Service at Forest Park Crematorium on August 24th as representative of the Association. The Service was a very emotional occasion as we heard about the tragic early deaths of both his eldest daughter and first wife some years ago. Graham Gooch spoke with a tear in his eyes about his mentor, soul mate and good friend. There were many other former professional cricketers present including John Edrich I believe. I had a little chuckle to hear a friend of Graham walking up to him and calling him Goochy! The flowers displayed his very close association to Essex Cricket Club who duly obliged his memory by winning the County Championship unbeaten in 2017. He would be very proud. He will be sadly missed by his family as well as many others, particularly in the cricket world. I last met him a little over a year ago when he cut the ribbon on the new synthetic cricket wicket at the old school. 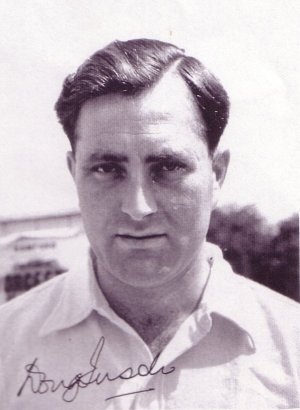 Any Monovian of vintage 1944-52 will have no doubt that Doug Insole is the most famous Monovian of our generation. Every morning at assembly we would belt out the hymn for the day, listen to the lesson to be read by the chosen prefect, and receive the praises or recriminations of the

day from the Headmaster. In front of us would be the panelling containing the school captains of recent times. There, obvious to all, was the name of Doug Insole. He was just before my time but rapidly became an icon. He went up to Cambridge achieved a blue in Football and Cricket, and amazingly, became captain of both the Cambridge teams. But that was just the beginning.

In 1947 the school were given the day off to attend the Oxford Cambridge match at Lords. Our headmaster, Mr. Stirrup was able to watch the match in the hallowed Lords Pavilion. The rest of us watched the match from the stands. All was peaceful, as befitted Lords in those day, until our hero Doug Insole came out to bat. We went mad. Doug could do no wrong. Every stroke of the bat was received by wild cheers. In those days such behaviour at Lords was unheard of. The next day at school we received the severest of reprimands from our beloved headmaster. He was severely embarrassed, sitting in the pavilion, by our rowdy behaviour. However we had been determined to demonstrate the pride we had for our hero and his admonitions fell on deaf ears. We can justifiably claim to be the original "Barmy Army".

Doug entered the Monoux in 1937. There he is in the 1938 panoramic school photo, ( right).. Within a couple of years the war began and Doug with the rest of Monoux was evacuated to Leominster. There he began to demonstrate his sporting prowess, becoming captain of the cricket and football 1st XI's. He was also a dab hand at table tennis. In 1947 he went up to St Catherine's College Cambridge and achieved "blue status" with the University football and cricket teams.

Upon leaving Cambridge he immediately joined the Essex County Cricket team with whom he played until 1963, and captained for 10 years. He also became a regular member of MCC cricket teams. In 1956 he became Wisden Cricketer of the year. During the period 1960-70 he served as England test selector, and was Australian tour manager in 1978-79 and 1982-83. The 78-79 tour was a particularly eventful occasion as the Packer attempt to recruit the players was at its height. During his terms of office he had to come to grips with the politically charged question of the inclusion of Basil D'Oliviera in the test side to tour South Africa. The cancellation of the 1968-69 tour to South Africa was one of the stepping stones to the end of apartheid some 20 years later. On May 5th 2006 his appointment to the post of President of the MCC was announced.