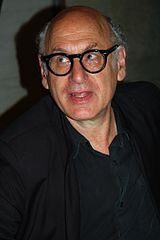 He was born in Stratford, London on 23rd March 1944, educated at the Sir George Monoux Grammar School and went on to study at King's College, London under Alan Bush, was accepted at the Royal Academy of Music in September, 1961, and studied with Bush and Thurston Dart, focusing on piano and seventeenth-century baroque music. He won the Howard Carr Memorial Prize for composition in July 1964.

As one of Britain's most innovative and celebrated composers, Michael Nyman's work encompasses operas and string quartets, film soundtracks and orchestral concertos.  Far more than merely a composer, he's also a performer, conductor, bandleader, pianist, author, musicologist and now a photographer and film-maker.

Nyman first made his mark on the musical world in the late 1960s, when he invented the term  'minimalism' and, still in his mid-twenties, earned one of his earliest commissions, to write the libretto for Birtwistle's 1969 opera Down By The Greenwood Side. In 1976 he formed his own ensemble, the Campiello Band (now the Michael Nyman Band) and over three decades and more, the group has been the laboratory for much of his inventive and experimental compositional work.

His most notable scores number a dozen Peter Greenaway films, including such classics as The Draughtsman's Contract and The Cook, the Thief, His Wife & Her Lover; Neil Jordan's The End Of The Affair; several Michael Winterbottom features including Wonderland and A Cock And Bull Story; the Hollywood blockbuster Gattaca - and, of course, his unforgettable music for Jane Campion's 1993 film, The Piano, the soundtrack album of which has sold more than three million copies. He also co-wrote the score for the 1999 film Ravenous with his friend and sometime protégé, Damon Albarn. Most recently his music was used in the 2009 BAFTA award winning and Oscar nominated film, Man on Wire.

His reputation among highbrow critics is built upon an enviable body of work written for a wide variety of ensembles, including not only his own band, but also symphony orchestra, choir and string quartet.  He has also written widely for the stage. His operas include The Man Who Mistook His Wife For a Hat (1986) and Facing Goya (2000) and he has provided ballet music for a number of the world's most distinguished choreographers.

In 2008, he published the sumptuous photo-book Sublime. His first major UK exhibition was held at the De La Warr Pavillion –Bexhill-on-sea in 2009 featuring "Videofile", a comprehensive selection of video works and photography extracted from CINE OPERA; a body of work of 50 short films and from his incredibly prolific photographic archives. He has also collaborated with several contemporary artists, including Bruce McLean, Mary Kelly, Damon Albarn, Carsten Nicolai and Kultlug Ataman. Nyman's visual work has also been exhibited in various public institutions, such as the Tate Modern in London, the Reina Sophia Museum in Madrid, and the Museum of Modern Art in New York.

In October 2009, Nyman released The Glare, a collaborative collection of songs with David McAlmont, which cast his work in a new light. The album - recorded with the Michael Nyman Band - finds McAlmont putting lyrics based on contemporary news stories  to 11 pieces of Nyman music drawn from different phases of his career.

Most recently, Michael Nyman has released his first feature film entitled NYman with a Movie Camera. The film presents a shot-by-shot reconstruction of Dziga Vertov's  iconic film, Man with a Movie Camera, replacing the original sequences with footage from Michael Nyman's own film archives. The film will be screened at the Torino International Film Festival in November 2010.