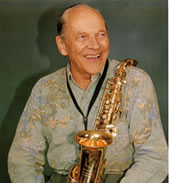 As all Old Monovians know, Sir John Dankworth is one of the most famous old boys of the school. He attended Monoux during the period 1938-1944, a period which saw the greatest upheaval the world has ever known, the Second World War. It was during these formative years that he discovered his love of jazz which propelled him to be one of the greatest British exponents of that art form. This year in recognition of his enormous contribution to British music he was awarded a well deserved knighthood.

In his autobiography "Jazz in Revolution" Sir John discusses the evolution of jazz and his contribution to it. The first few chapters discuss the formative years of his life in Walthamstow, his time at Monoux and the disruption of his schooling by the war and evacuation. They also provide an insight into the limitations of any education system in dealing with those whose exceptional ability falls outside the conventions of the day.

We are grateful to Sir John in giving permission to include excerpts from those first chapters in this web site.