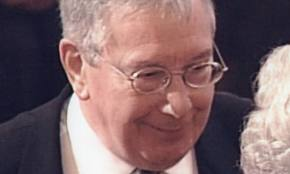 John Percival was born in Walthamstow and attended Monoux from 1938 to 1946.

Extract from 'the Monovian':-

The excellence of the magazine during Percival's editorship is beyond question, and his wide interests made him well known and popular in every department of School life. His work was really outstanding and everything he undertook was performed capably.

John Percival had decided at the age of 16 that he would be a dance writer. During his school days, national service (he was a conscientious objector and served as a hospital orderly) and his time at St. Catherine's College, Oxford, he made it his business to see as much dance as possible and to read everything he could find on the subject.

On graduation, he took a job with the London Ambulance Service, moving on to an administration post with the LCC. He remained there and with the Inner London Education Authority until it's abolition in 1990.

His work rate was astonishing. After a day at County Hall, he would race home for a quick meal, then a performance, write and file his review, returning home to work on a programme note or a feature.

His real career was as a dance critic, covering dance in all it's forms for the Times from 1965 until 1997. He then reviewed for the Independent for several years. He wrote a vast number of other publications, notably the magazine Dance and Dancers, produced eight books and wrote the commentary for a film about Rudolf Nureyev.

He was appointed MBE for services to dance in 2002.