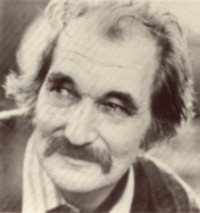 Robert Barltrop was born in Walthamstow in 1922, his family having lived there since 1811. He is the author of The Monument (1975);Jack London: the Man, the Writer, the Rebel (1977), which has been translated into several languages; Revolution: Stories & Essays by Jack London (1979, editor); The Bar Tree (1980); The Muvver Tongue(1981); and A Cockney Dictionary, published by The Athlone Press(1985). He has written for numerous magazines and papers, has broadcast on several occasions, is a consultant on Cockney language for both the BBC and ITV, and has appeared on television.

We are very grateful to Robert Barltrop for permission to include extracts describing the Monoux during the 30's from his trilogy "Growing up in North East London between the Wars". He attended the school in the years 1933-39 and describes life in the school very much from the point of view of a typical young Walthamstow boy, in a period when children began to be offered opportunities denied to their parents.
This trilogy is published by the London Borough of Waltham Forest Libraries & Arts Department, and Robert Barltrop holds the copyright for the extracts presented here.

PART I. MY MOTHER'S CALLING ME: describes a boyhood in the 1920s and early 30s, never far from the High Street market. Home life, and aunts and their young men; shops, playground games and fights; beggars and strange characters. Trips to the seaside and days at the Hollow Pond; the Walthamstow Palace, cinemas, the old speedway at Lea Bridge; illnesses and calamities. All this, and a school 'like a shabby fortress' - the life of a boy about the streets.

PART II. A FUNNY AGE: tells about the Monoux Grammar School in the 1930s, in a transition from fee-paying boys to 'little monkeys from back streets, who had passed an examination'. For some of this time the writer lived at Epping, and he had to help his father on the horse-food round in East London; but school life in Walthamstow continued. Sports and politics in and out of school, and an extraordinary headmaster; morals, manners, Scouts, and the struggle for jobs.

PART III.BRIGHT SUMMER DARK AUTUMN: recalls going to work, first in Spitalfields; then a butcher's boy in Higham Hill, a shop porter at Sainsbury's in Chingford, and a boxing career. Playing in a local football league, for a team that could not win. Then the outbreak of war in 1939, and the start of the Blitz on East London - the writer watched it from a rooftop. Bing Crosby records in the air raids, and nights on ARP.